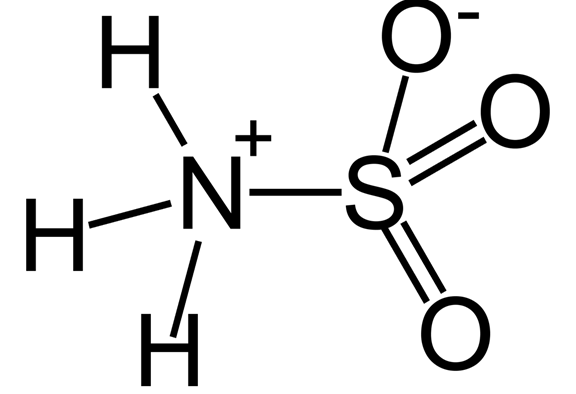 An acid is an ion capable of donating a hydrogen ion or forming a covalent bond with an electron pair. Most acids that we encounter in our everyday life can dissolve in water. The higher the concentration of the hydrogen ions which are given out by an acid, the higher its tartness and the lesser the pH of the solution. In addition to that, acids may be categorized as either durable or weak acids depending on how they fully detach into its ions in water. A strong acid fully dissociates in water whereas a weak acid only partially separates into its ions, resulting in a solution that contains ions, water and the acid itself. Sulfamic acid consists of a single sulfur atom covalently bound by hydroxyl and amino groups, and by double bonds to two oxygen atoms. Sulfamic acid has been used in designing many types of therapeutic such as, HIV reverse transcriptase inhibitors, antibiotics, anti-cancerous drugs, among others.

The concentration of sulfamic acid in a solution is on the higher side of around8-10 %, but this depends on the scale deposits in tubes. It is used in cleaning a range of domestic appliances and industrial equipment. The concentration of the acid helps in the removal of hard water scale, copper corrosion, and light rust.

Sulfamic acid removes rust from metals, and its solution is less corrosive towards metals than other mineral acids like hydrochloric acid.

Sulfamic acid holds a scale solubilizing ability, which makes it perfect for removal of scale from equipment, thus increasing the effectiveness of plant and equipment. The acid is less corrosive as compared to hydrochloric acid. Corrosion inhibitors are added to cleansers used in cleaning equipment, of which sulfamic acid is one of them.

This acid is used in households as a descaling agent in toilet cleaners and the removal of limescale on floor surfaces. It is the most preferably used as compared to hydrochloric acid for its intrinsic safety. Sulfamic acid does not form chlorine gas when mixed with hypo chloride-based products such as bleach, as other common acids would do. Reaction with bleach neutralizes the solution, making it effective and safe for household use.

Sulfamic acid is used for the stabilization of chlorine in swimming pools and cooling towers. The sulfamic acid helps the chlorine in the pool remain for longer making it more useful. Stabilized chlorine helps in saving cost that could have been incurred in purchasing more chlorine and makes caring for water easier and less time-consuming.

Sulfamic acid prevents pulp degradation due to its temperature at chlorination, permitting bleaching at high temperatures and lowering the pH without losing strength.

7. Diazotization in dyes and pigment manufacturing

The acid removes the excess of nitrides used in the diazotization reactions in the manufacture of dyes and pigments.

8. A catalyst for the esterification process

An ester is a carbon-based compound which is made by substituting the hydrogen of an acid by another organic group, usually an alkyl. Esterification, therefore, is a process when two reactants ultimately form an ester. Sulfamic acid speeds up this process.

Sulfamic acid is a component in the fire quenching media and is the primary raw material for ammonium sulfamate, which is used as a fire retardant for domestic products.

Nitrous oxide, usually known as the laughing gas, is a chemical compound with an oxide of nitrogen. Laughing gas is a colorless and non-flammable at room temperature with a slight metallic scent. Sulfamic acid helps in the synthesis of nitrogen and oxygen to form a more complex product, nitrous oxide.

Sulfamic acid separates nitrite ions from a mixture of nitrite and nitrate ions during the quantitative analysis of nitrate by the brown ring test.

15. Removal of excess grout on tiles

Sulfamic acid removes grout haze and mortar residue form tiles. In addition to that, the acid is safe for use on colored grouts.

75 Uses of Alcohol in Medicine