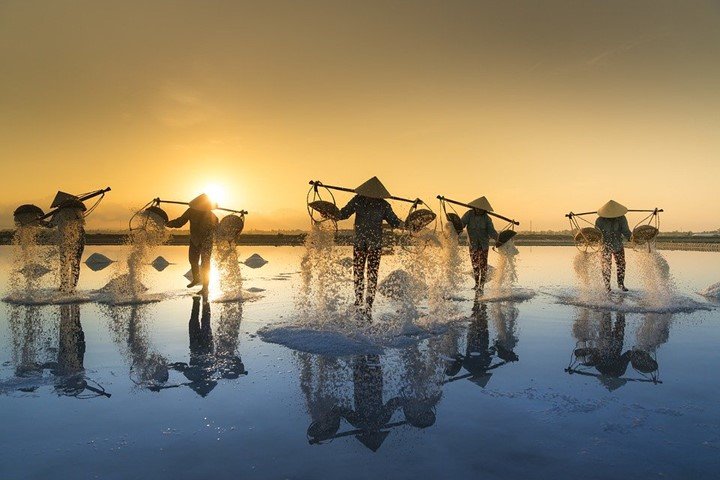 In chemistry, salt has a completely different meaning from that which we are used to. Salt is a solid chemical compound, which is composed of positively charged ions known as cations, and negatively charged anions known as anions. These compounds are present so that the product becomes electrically neutral, that is, the product has no net charge. There are different classifications of salts, namely; alkali salts, acidic salts, and neutral salts. Alkali salts are salts, which produce hydroxide ions when dissolved in water, acidic salts are salts which produce acidic solutions, whereas neutral salts that are neither acidic nor basic. Salts have different properties, from color, taste odor, solubility, melting point, and conductivity. Some of the uses of salts include the following;

1. Used in cooking as well as preservation

Sodium chloride also referred to as the common salt, is used in the kitchen for cooking. It is added during meal preparations to add flavor to the food. in addition to that, sodium chloride is also used in keeping meat and fish dry for a long time.

2. Maintain the right balance of fluids in the body

Apart from being used in the kitchen, sodium chloride is also used in maintaining the balance of fluids in the body. Salt is an inorganic compound, and this means that it does not come from living things, but is formed chemically. The body needs adequate salt to function because too little or too much salt in the body can also be harmful to the body.

Most of the time, stains and grease occur in the kitchen and even on clothes. Maybe you have spilled the tea on your shirt and removing the stain is becoming difficult, simply soak the stained shirt in salty water and the stain will be no more. In the kitchen area, the cooking pot has grease in it and removing it is hard, wash the pot with a little bit of salt and the grease will completely come out.

4. Prevention of ice during the winter season

During the cold seasons, walking or driving on hard ice is hard. This is where sodium chloride comes handy. Simply remove ice from roads by pouring salt on the ice and it will melt straight away. This results to easy movement to and from work or home.

Apart from being used domestically, salt is also being used medically. In hospitals, doctors can prescribe salt, usually written as sodium chloride in IV drips. This is mainly prescribed to patients who are suffering from dehydration and electrolyte imbalance. Sodium chloride helps in hydrating the body and balancing electrolyte in the body.

7. Manufacture of soaps and detergents

Sodium hydroxide is a common strong base and is mostly used in industries. It is commonly used in the manufacture of soaps and detergents and this process is known as saponification. This type was made specifically for use in hard surfaces and not in liquid products because it is easier to keep and to transport.

Sodium hydroxide is also commonly used as an industrial cleansing agent. This is done so by adding the salt to the water and heating it, then the resultant factor is used in cleaning process equipment and storage tanks, among others. it is helpful in dissolving grease, fats, protein-based deposits, and oils. Apart from removing the stain in storage tanks, sodium hydroxide is also used in cleaning pipes that discharge wastes, such as the pipes under sinks, and other drains at home. It unblocks clogged drains and leaves the surface looking cleaning and free from clogged wastes.

Sodium carbonate also referred to as soda ash or washing soda is a type of salt that was originally extracted from the ashes of plants, which grew, is soil, which is rich in sodium. The main function of sodium carbonate is that it is used as a water softener. Hard water is turned into soft water when sodium chloride is added to the hard water. Sodium chloride removes the hardness of the water, leaving it soft and free from scale and scum.

Sodium carbonate is added to the swimming pools to increase the alkalinity of the water. This is essential because the salt helps in maintaining the proper pH balance of the pool water.

Wearing one color shirt can be boring at times and you might be tempted to add a colorful dye to the cloth. However, the struggle comes when the dye cannot get soaked well in the fabric and gives the desired results. This is the time when it is advisable to use sodium carbonate because when the salt is added to the dye, it helps the dye in bonding to the fabric effectively.

This is also another type of salt that has many other uses outside the kitchen. It can also be used medically, and some of the uses of sodium bicarbonate are listed below;

Acid reflux, commonly known as heartburn, is a condition where the acid refluxes out of the stomach and comes up to your esophagus, which is the tube that connects the stomach to the mouth. There are different causes of heartburn, ranging from stress, overeating to eating spicy or greasy foods. This is a burning sensation that causes extreme discomfort to the body. Sodium bicarbonate helps in treating heartburn by neutralizing the acid in the stomach.

Sodium bicarbonate is a home remedy that is commonly used for whitening the teeth. Most mouthwash manufacturing industries are trying to incorporate sodium bicarbonate in their toothpaste. Toothpaste with baking soda help in whitening the teeth as compared to a toothpaste without baking soda. It is mild and breaks plaque bonds in the mouth effectively and with one wash.

Excessive sweating can make a person feel extremely uncomfortable, especially when they are in public. Typically, human sweat is odorless. It is the bacteria that is present under the armpits that make sweat have an odor. Baking soda eliminates this odor perfectly, and all that an individual is required to do is to put a little baking soda under the armpits for a day and see the difference.

Itchy skin does not necessarily need to be caused by allergic reactions as some happen naturally. A baking soda bath is recommended especially for soothing bee and bug bites. Make sure that the affected area is soaked thoroughly to get effective results.