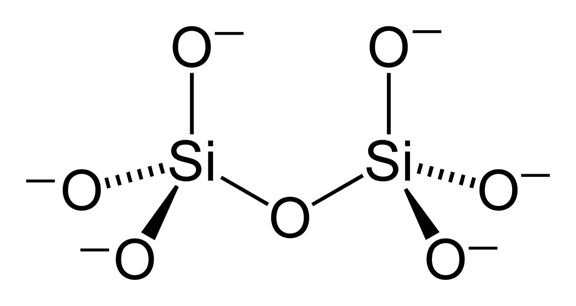 A member of the ionic compound found in anions family and has oxygen and silicon. Silicates are made of silicate groups and form rocks. They are the most abundant group of minerals on earth crust that occupy approximately 90% of the crust. Different silicate minerals take place in great combinations because of processes that have been re-working and forming on earth. The processes are diagenesis, weathering, fractionation, melting, metamorphism, and crystallization. Minerals found in the earth have been centered by silicon atom of a tetrahedron, which has four atoms of oxygen covalently on it. Additionally, the silicates of minerals are put into seven groups depending on their structure of silicate anion. The major groups include Nesosilicates, sorosilicates, cyclosilicates, inosilicates, phyllosilicates, and tectosilicates.

Microchips are a form of silicon cut down to small proportions that have controlled printed orders through photographic procedures. Silicate has unique properties, for instance, producing thermal insulation, conduct electricity, provide an elevated frequency vibration, and is capable of conducting electricity. The most central component of silicates is silicon. The crystal is very strong and can be cut into minuscule sizes, thus can conduct electricity. These properties make silicon the best material to create microchips that pass through computers, mobile phones, and gaming devices.

Quartz crystals are other examples of silicates with an ideal capability to give a high rhythmic frequency vibration. These characteristics make quartz crystals to be used in radios, pressure gauges, and watches. When putting together with electronic sources, the crystals produce a rhythmic beat and log movement piece as megahertz. The MHz goes for 1 million cycles in second. For example, in a clock, the rhythmic crystal beat changes the second hand. Besides, the quartz crystals are applied in mysticism.

Glass is made from silicates. It is among the major and most productive uses of silicates. follow the procedure, formless, and hard material such as clay or sand is burned to high temperatures. The material formed after heating is malleable, which can make glasses for drinking.

4. Uses of silicates in Ceramics

Silicates are used to create ceramics. The ceramics made from silicates have thermal characteristics; hence, they are a great advantage in the engineering and technology industries. In one such instance, the space shuttle uses ceramic silicate tiles as a barrier from intense atmospheric temperatures. Silicates also benefit boreholes’ walls when drilling to avoid breaking of walls.

Building material treated with silicon solution can lessen porosity found mostly in masonry products such as plasters, stucco, and concrete. Efficient aid assists in reducing the penetration of water. Concrete has excess portlandite, which undergoes a chemical reaction with silicates to form a permanent surface, and these increase durability and repel water. The treatment should take place after seven days, and the coatings are called silicate mineral paint.

Detergents auxiliaries, including complex and modified sodium, dislocate, use silicates in the coating. These make the detergents to get ruggedness.

Industries use silicates to treat wastewater as an iron flocculent and alum coagulant. The silicates react with colloidal molecules to form big aggregates that go below the water column. The tiny negative particles submerged in water react with the silicate. Coagulation is the process when double layers break down after ionic strength is increased due to the addition of silicates. Water treatment is also among the most important uses of silicates after glass manufacturing.

Water glass made from silicates contains useful solids like perlite and vermiculite. The glass can be blended with light aggregates to make strong, extreme temperature insulating boards useful in refectories, protection from passive fire and insulation like model pipe insulate applications. Besides, silicates can be mixed with fine mineral powders, including vermiculite dust, a known scrap extracted in the process of exfoliation, and is utilized to produce excessive temperature adhesives. Water glass is the least expensive and easy to get; these make it popular in refractories.

Silicates make hand dyes when combined with reactive dyes, which need high PH to make a chemical reaction with textile fiber. The dye is put together with cellulose fabric like silk, rayon, or cotton, then given time to dry, after which the dye is painted with silicate. Lastly, the fabric is covered gently with plastic to retain water and left at room temperature for 1hour to react.

Silicates come in solid form, a liquid form, and water glass. If you want to ensure longer passive fire protection, the solid beads should be waterproof. Solid silicates have been abundantly used to aggregate silicone rubber to generate plastic pipes devices for putting out the fire. On the contrary, silicone rubbers alone cannot stop fire generated behind buildings with drywalls. You should not risk using silicates without the correct waterproofing procedures. On top of that, silicates function well as well as stay for a long period when protected adequately. Illustration of this is seen in most DIBt that use waterproof silicates to make plastic pipes used as devices to stop a fire.

Silicate minerals are used to fix and fit paste in the muffler. When put in water, the mineral forms a dense paste, which is applied easily. It helps the exhaust system to drive out more water when the internal burning engine has heated up to its required temperature. The compound of silicates remaining has properties like glass, therefore, make a brittle repair.

The minerals are utilized as exhaust systems and sealer cracks to fix resonators, mufflers, tailpipes, and other components of exhausters, whether with the availability of fiberglass mounting tapes or not. Additionally, they are used to fill spaces in the head gasket. The minerals are the best choice for repair since they can last for two years or more, and the damage disappears fast. The solution formed is less expensive, quick to use, and disable engines permanently.

The use of silicates alongside sawdust has made buildings to be fire-resistant, however, has created difficulties by emitting smoke.

Clay body requires more water to make it liquid, silicates act as deflocculates and assist in lowering viscosity. Moreover, it helps pottery to create a crackle effect, often wheel-thrown. A molded bottle is thrown on a narrow- thick-walled wheel, and then silicate is brushed through the piece. After this, the piece walls are stretched outwards. Lastly, it is the main server in magic water required when putting together pieces of clay, especially if the level of moisture is different.

The manufacturing company of Colt used adhesive silicates to produce paper cartridges for revolvers black powder. The cartridges were covered with silicates then inserted in revolvers cylinders to fasten the reloading of the cap.