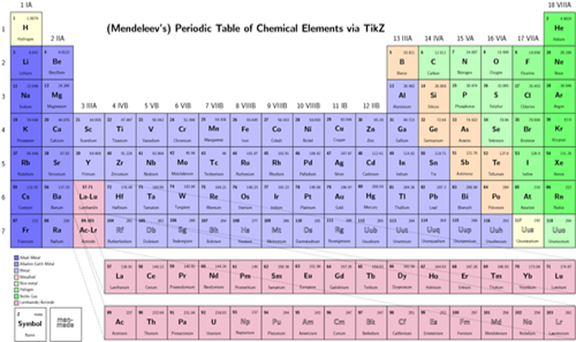 An element is any one of the simplest chemical substances that cannot be decomposed in a chemical reaction or by any chemical means and made up of atoms all having the same number of protons. There are 110 known elements in the world, but there are still a whole lot of others that are yet to be discovered.

The first 20 elements are the most used in the world in various fields. Below, we would take a look at few uses of these elements and why they’re so important.

1. Lithium used to power up phones and laptops

Lithium is the third element in the periodic table and it is found in our light batteries in phones and laptops. It helps in the powering of these devices when there are down and are being charged. Because of its lightness, it can store enough current for power.

This is another major use of elements that is so important. Boron helps in the strengthening of the glass. This element makes the glass resistant to heat and thermal shock and it also makes it resistant to chemicals.

Diamond is completely made up of pure carbon and little impurities of nitrogen. Carbon is what fives diamond is glittering appearance and strong nature. It is safe to say that without the presence of carbon, diamonds will not be what it is, in terms of value and unique nature.

4. Nitrogen is used in fertilizers Nitrogen and other elements like phosphorus and potassium are used in fertilizers for the enrichment of the soil for proper plant growth. This is an important use of elements as they help to keep the soil fertile for the growth of trees and crops.

5. We breathe in oxygen

Without oxygen, there would be no life or existence of humans in the world. We breathe in oxygen that is given by plants to survive. It is the most useful element in the world. It is used in hospitals to sustain patients that are at the point of death.

6. Fluorine is used in our toothpaste

Of course, it may sound new to you, but actually, fluorine is found and a great addition in our toothpaste. It gives it the ability to clean the teeth from all dirt and wash the mouth from bacteria and other microorganisms present in the mouth. Sodium chloride (NaCl) can also be called table salt. The salt we put in all of our foods and junks is sodium chloride. Without it, I’m not sure we would have been able to see a better replacement for the salt.

8. Phosphorus is used in matches

The reddish-brown substance that is found on the top of the stick is made up of phosphorus. The presence of phosphorus is what ignites the spark and lightening of the matchstick when it is pressed against the match stick box.

As we all know, water is made up of hydrogen and oxygen. Water is a universal solvent that we humans can’t do without. It is very important and if there is no water, there would be no existence.

Elements have thousands of uses and applications in the modern world. They are very important, to the extent that, there is nothing we use, that is not composed or made up of elements.