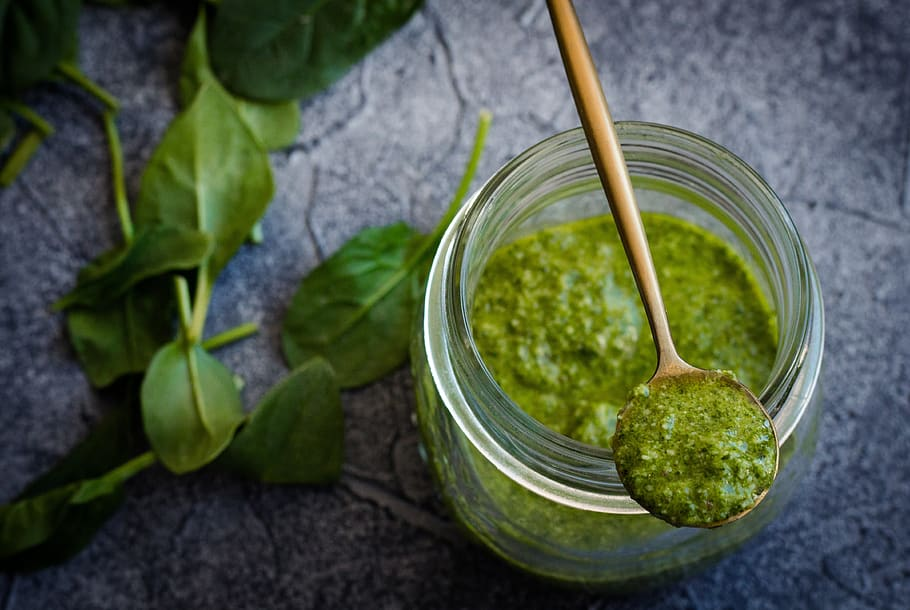 Pesto is a sauce green in color known to have its origin in Genoa. Its name in the Genoese verb is “picture,” which means to crush. The name means crush because Pesto is created and obtained from crushing some ingredients using a motor and pestle. Pesto is made by crushing the following ingredients; olive oil, pine nuts, basil, parmesan cheese, and garlic. Basil leaves are responsible for the green color, and if you run out of it, you can always replace it with either spinach, arugula, or kale. One may also replace pine nuts with either almonds or walnuts. Pesto has a couple of other uses apart from being a pasta sauce, and these uses will be discussed below.

1. Used in filling and stuffing

For baked breaded chicken, it requires to be stuffed and filled with some fillings of your choice. Pesto is an excellent filling that one should consider simply because your chicken will have a very flavorful taste. The Pesto may be added alone, or to improve the texture and flavor, it may be mixed with cream cheese, mayonnaise, or bread crumbs. The above-mentioned may also be excellent if stuffed into sandwiches.

2. Used as a topping for pizza

Man adults do not lie using the red sauce as their tipping, but rather children like it. Pesto becomes the other topping sauce used to change the standard topping of the traditional pie. Besides, Pesto may also be used as a horse-oeuvre.

3. Used as a pasta sauce

Pesto is widely known as a pasta sauce, but that does not mean it cannot be used for other foods. It may be used in dishes such as chicken, vegetables, meat, and also fish. In other foods, Pesto is served at the side or smeared on the food like in grilled Chilean sea bass, and with every bite of the food, the delicious taste of Pesto is felt.

4. Used as a sandwich spread

Any sandwich can go well with Pesto as one may choose to replace mayonnaise and mustard in their sandwiches. It is smeared on top of the bread before the other fillings are added to the bread’s top. Once Pesto has been incorporated into your sandwich, you should expect a little change in flavor since Pesto’s flavor will be added. Examples of already made sandwiches using pesto include; turkey sandwich and a tomato – mozzarella Panini.

5. Used as a salad dressing and mix-in

The Pesto adds a unique flavor to the foods it’s added to, and in this case, it makes salads delicious. It works well with other ingredients, and for that, it can be mixed with just any other food additive to enhance food flavors. For example, it may be mixed with either mayonnaise or olive oil to create a delicious salad. It has also been used as a salad for Tuna, pasta, and chicken. Apart from salads, Pesto may also be mixed into mashed potatoes, rice, and risotto to provide them with a unique flavor.

6. Used in appetizers and dips

Once Pesto is made, it’s very delicious, and for that, it is used in very many types of appetizer recipes. It can be used to spread into crostini, and a grape tomato can be used to top it. In cocktails also, Pesto can be used as a sauce. To be specific, it is used in a shrimp cocktail. To use as a dip for either vegetables or chips, one may prepare the Pesto with some Greek yogurt and some cream cheese.

7. Used as a breakfast condiment

Many people like having eggs for breakfast, and they take it with some jelly, ketchup, or even hot sauce. Pesto may be used to replace these other sauces, and for that, it brings in a new taste and flavor in one’s breakfast eggs.

8. Used as an ingredient for a pasta dish

Pasta making is the process that has used Pesto majorly because once the Pesto has been mixed with pasta, the flavors of the ingredients making Pesto that is cheese, garlic, and basil are all brought out. Any pasta can be prepared using Pesto, and the flavor is always the best.

9. Used to bake into bread

Pesto in making bread is used by spreading it into any crusty bread or toast. It may also be prepared by adding it into the bread dough so that the rolls made will be tasty and good.

For those people who love vegetables, using Pesto to top your vegetables brings a whole better taste and flavor different from the one you’re used to. It also worked well with baked potatoes.

11. Used to smear on bruschetta

Bruschetta is one of the quickest made appetizers, and it’s made by topping up a piece of mozzarella piled on a slice of baguette.

If you do not want to marinate your meat, then you may choose to use Pesto. Pesto also goes well with others like; chicken, fish, pork chops, and grilled steak. Seasoning meatballs and meatloaf can bring very excellent taste and flavor.

13. Used to garnish the soup

Pesto is used as soup for specific soups like; potato soup, corn chowder, and Soupe au Pistou. It is served by spreading it over the already made soups or stews.

Earlier, we have seen that Pesto may be used on raw vegetables. However, it may also be used on roasted vegetables to add a fantastic flavor. The process is simple, first roast your vegetables and while still hot, and top them using your already made Pesto.

Just two ingredients are required to make this possible, and these are Pesto and softened butter. The two are mixed, and the result is the pesto butter that you may use on your vegetables, chicken, fish, potatoes, or even your rice.

In conclusion, Pesto is amazing, and the above uses have shown that it may be used in foods such as rice, potatoes, chicken, and vegetables, both raw and roasted, among others.