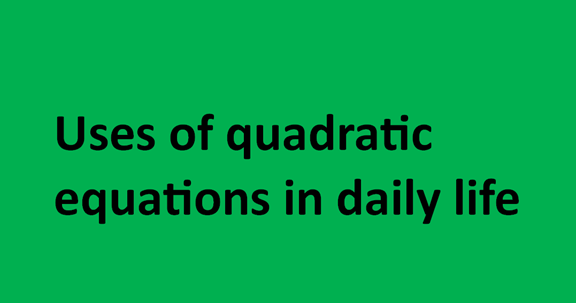 Did you know that there are many uses of quadratic equations in daily life? It plays a very important role in the survival of human beings. Sometimes people solve the equations but they are not aware because it comes in naturally. Every field that involves the calculation of speed, area or determining profit has to involve quadratic equations. It can be directly or indirectly.

So what is a quadratic equation? It is an equation that involves at least one squared variable. The most standard form of the quadratic equation is in the form, ax² + bx + c = 0. X represents the unknown while a, b and c are the coefficients because they represent known numbers.

Quadratic equations are often used to calculate business profit. Even when dealing with small products, you will need to solve a quadratic equation to determine how many of them will make a profit. For instance, if you want to sell fluffy carpets and your target is to earn $100k from that business. First, you need to determine your average selling price. In this case, let us set it to $50 per carpet. So if you make a profit of $10 per carpet then you will have to form a quadratic equation in order to know how many carpets you should sell to hit $100k.

Whenever construction is taking place, constructors use quadratic equations to determine the area. People also calculate the areas of other things such as a piece of land and boxes. However, a good example to illustrate this is in construction. For example, most buildings take up the square or the rectangular shape. For rectangle building, it means that one side is supposed to cover twice as much as the other sides. To calculate the area of the materials needed to cover that area will lead to the formation of a quadratic equation.

There are many uses of quadratic equations in sports daily. It has become very useful in the gameplay and analysis as well. For example when a football analyst needs to determine the form of a team or athlete then they always make calculations. You will find one element or two of a quadratic equation in this analysis. Basketball players score by throwing the ball into the net and measuring the precise distance and time that it will take. Using a velocity quadratic equation can calculate the height of the ball. Players solve that equation every time when scoring but the computation is all done in their brains within milliseconds.

Learning is part of our daily life. We cannot ignore the fact that quadratic equations play a big part in our education systems. In the classrooms, it’s where it all begins. Every day millions of students are solving quadratic equations. If you become a mathematics, physics or computer science lecturer, chances are that you will be dealing with these types of calculations every day. It has become a part of our lives, without it learning some aspects of science and mathematics would become impossible.

Finding the speed of a given object may lead to the formation of a quadratic equation. For example, kayakers use these equations when determining the amount of speed they have to apply while going up or down a river. Take for example the kayaker is going upstream against a river flowing at 2km per hour. So if he/she manages to move up to 15 km then the journey will take 3 hours to and from. Before arriving at a speed that kayaker will be moving then you must form an equation such as 3x^2 – 30x -12 = 0. X stands for speed and the final answer will be
10.39 km per hour.

Some elements of a quadratic equation are used when setting up a satellite dish. This is because it involves setting up to certain angles so that it can be able to pick up signals effectively. The dish traps the signal and passes it to a feed horn which now transmits to your TV or a station. By setting a dish to receive a signal from two or three satellites at the same time highly involves solving a quadratic equation. A scientist or engineer may not be aware because he is experienced. However, for the system to work then it must be set up according to the right angles.

Quadratic equations are often used by the military or law enforcement to determine the speed of moving objects such as cars and planes. The military can also use them to determine the distance between them and an approaching enemy. In addition, the military uses quadratic equations to predict where tanks or artillery will land. The police apply it when figuring out the trajectories of bullets. The traffic police use it to figure out the speeds of cars involved in accidents on the road.

There are thousands of management and clerical work that involve the use of quadratic equations daily. For example production, managers and engineering managers supervise people that are dealing with equations. That means they need to have solid knowledge on the same. Human resource managers have to determine the workforce cable of completing some given tasks. In addition, they have to figure out how to pay or design pension plans. All those activities actively depend on the quadratic equations. Insurance agents also deal with them because they have to design complex insurance models and plans that involve a lot of computation.

Quadratic equations are also applied in agriculture extensively. Without agriculture, human beings cannot survive. So that means that these equations play a major role in the existence of the human race. One of the biggest applications of quadratic equations in Agriculture is in the arrangement of boundaries. For example, calculating the areas of pens that will produce high yields involves finding the areas. Some area calculations lead to the formation of an equation.