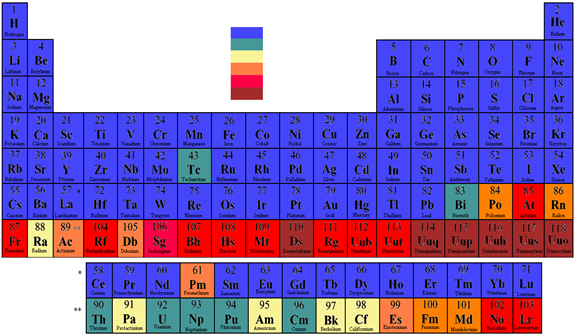 When most were students, Chemistry was one of the subjects we most probably found boring and hard to understand. But, Chemistry is a very simple subject, especially when you make practical applications of the elements you learn about. One of those “boring” subjects studied in Chemistry is the radioactive isotope, also referred to as a radioisotope.

Radioactive isotopes have found numerous applications in our modern world. The following are 25 of the common uses of radioisotopes;

1. Measuring the Thickness of Sheets

In industries dealing with metals or plastic sheets, radioisotopes are used to measure how thick these sheets are. Their specific thickness is usually identified by measuring the strength of the radiation rays penetrating these metal or plastic sheets.

Normally, large X-Ray machines are used to identify any damages made on metal parts. Radioactive isotopes can be used in place of these X-Ray machines, and still, work as effectively to examine any defects in the metals.

Radioisotopes have found another application in spacecraft, where they are used as a source of power. An example of such radioisotopes used to provide power in spacecraft is the plutonium-238. This radioactive isotope is first decayed, after which it is converted into electricity. The smoke detectors installed in homes or offices use radioisotopes to detect any fire activity. For instance, just tiny amounts of the radioisotope element, Americium-241, detects any smoke entering a room and triggers the fire alarm.

Radioisotopes have proven to be very useful elements in the identification of the right locations for drilling oil wells. This is because radioactive isotopes can detect any oil wells which have been filled up with sand. These isotopes are also used for measuring and controlling the flow of liquid in the oil pipelines.

In biomedical research, different radioactive isotopes have proven to be a very important aid. For instance, the Calcium-47 radioisotope has been used greatly in the study of different cellular functions, as well as how the bones are formed in mammals. Inspection of all the airline luggage is usually done using radioisotopes. These radioactive isotopes are used since they can detect hidden explosions and another hidden armory.

Newly invented drugs, or even potential drugs, have to be gauged to ensure that when metabolized by the body, they do not form any harmful by-products. The scrutiny of these drugs is done using radioactive isotopes.

Both the diagnosis and treatment of cancer is done using radioisotopes. This is because radioisotopes emit gamma rays, which are used to identify and kill cancerous tumors.

In the pharmaceutical industry, radioactive isotopes are used for measuring the right dosages for different types of patients.

To understand how reactions occur in the body step by step, radioisotopes are used as tracers. When working as a tracer, the radioactive isotope follows the entire path of the reaction to the end. The radioisotopes, therefore, help in the understanding of how substances are distributed in organisms.

The study of how plants grow and develop has been made possible by the use of radioisotopes. Radioactive isotopes are also used to label fertilizers, as well as to study how the nutrients in these fertilizers are absorbed by the crops. The radiation rays released by some radioisotopes kill pests, while others work to sterilize the pests such that no more offsprings can be produced. Whatever the mechanism used, these radiations help to control pest infestation.

Not only are radioisotopes used to package food, but they are also used to preserve food. The radiation emitted by the radioisotopes rays kills all microorganisms that could cause food spoilage.

In big industries, radioactive isotopes are added to liquids or gases in pipes. Adding these isotopes helps to determine the flow rate of these materials, which in turn identifies and locates any leaks in the pipes.

Some industries that deal with liquids, gases, or solids require regular checking of the levels of these substances. In cases where these substances have high pressures or are corrosive, gauges containing radioisotopes are used in place of direct contact gauges.

New and better crops are being produced using radioisotopes. The radiation rays emitted by these radioactive isotopes are used to change the genetic make of the crops, producing plants with higher yields and better resistance.

Radioisotopes can delay the ripening of fruits for up to 7 days. The infused delay in the ripening of these fruits is essential as it helps to improve their shelf life since they can be stored for longer durations.

Yes, Chemistry may have been boring to many, but it sure is one of the major reasons why we are alive today. The unstable aspect of the radioisotopes, as well as the excess energy in their nuclei, has contributed to the wide application of these important isotopes.