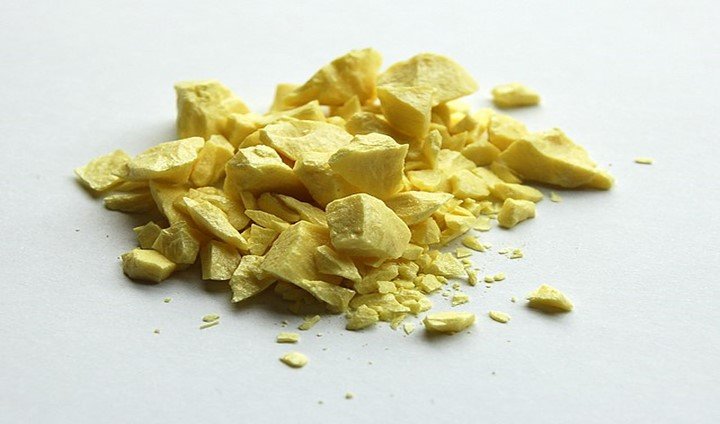 Sulfur is a naturally occurring pure substance that cannot be simplified further. It can also be defined as a chemical element that exists in its natural form in living organisms. Time and again, your body needs minerals for proper functioning. Therefore, aside from the natural uses of these naturally occurring substances, they have other biological applications that may be affected directly or indirectly.

Sulfur has a wide range of uses. These uses can be categorise4d as chemical or biological depending on how it is applied. This article will explore thirty of the most common uses of sulfur.

1. Used as a laboratory chemical

This can be taken in literal terms to mean that it is used as a laboratory reagent in scientific studies and researches. It is therefore used as a reactive or unreactive element.

Sulfuric acid is manufactured industrially by the contact process. The main raw materials in this process are sulfur and oxygen. They are taken through a series of changes to yield sulfuric acid which is in itself used for advanced chemical uses. There are different types of fertilizers depending on their contents. For instance, there are ammonium fertilizers that have ammonia as their majority compound. Therefore, sulfate fertilizers contain sulfates and sulfites which as compounds of sulfur. Alternatively, sulfuric acid is applied largely for the production of fertilizers; implying that sulfur is a rich component in these fertilizers.

In this process, harvested rubber is taken through a series of processes to become hard. Sulfur is the key chemical used in the vulcanization of rubber.

These are chemicals used to kill the fungus. These organisms can attack your body or your habitat. They have substantial effects including diseases when they attack you or your pet. Therefore, highlighting the need for getting rid of them. Sulfur is an ingredient in the manufacture of these fungicides.

An insecticide is a chemical used to destroy harmful insects such as mosquitoes. Since the effects that organic compounds have on the environment are unprecedented. It compels researchers to find alternative ways of getting rid of insects without polluting the environment. Sulfur compounds are therefore used in the production of insecticides.

7. It is an essential life element

Organosulfur is a compound of sulfur that exists in a majority of living organisms. For example, it exists in plants such as garlic; hence giving it its distinct smell. Rotten eggs smell foul. Well, that smell is due to the availability of sulfur.

8. Combines with other elements to form building blocks of protein

The building blocks of proteins are amino acids. These essential compounds are made up of a host of elements including phosphorus, sulfur, carbon, oxygen, nitrogen, etc. Vitamins thiamine and biotin have shown to contain a high presence of sulfur in them. The importance of vitamins needs not to be under-noted for they contribute to high enzyme activity and other essentials in your body.

10. A component in cofactors

Cofactors are body compounds that are used to activate enzymes to work on a particular substrate. If they are not available, a human being will not survive. Glutathione and iron-sulfur proteins are some of the most common cofactors known to contain substantial amounts of sulfur.

Sulfur was first used for decorating furniture inlays in the 18th century. However, that was later abandoned due to its adverse effects on the environment.

Sulfur is used in helping to drive steel bolts into drilled concrete especially where there is a need to break the high shock resistance.

The therapeutic value of the sulfur stone is not confirmed, but it was widely regarded as a relaxant by therapists back then.

The element is used as an ingredient in the manufacture of cosmetic products such as shampoos used to fight dandruff.

Sulfur is medically proven to treat itchy skin conditions brought about by bites from mites. Since it has a foul smell, it is better applied at night as prescribed. This condition can bring insecurity even depression about your skin. Most of the medications you get over-the-counter for the treatment of this condition contain sulfur.

17. Reduction of cholesterol contents in the body

Cholesterol is said to be responsible for many medical complications such as heart failure and obesity. Research shows that drinking sulfated water helps to reduce the count of cholesterol in your body.

18. Fight against the common cold

Sulfur helps to reduce the prevalence of cold symptoms relieving you of the suffering.

Organosulphur is credited for being able to reduce the effects of allergy-related complications as well as reduce your body’s reaction to allergens.

This is the swelling of the pharynx. However not conclusive, research has indicated that sulfur is used to cure this condition.

Conclusive research has proved the effectiveness of sulfur-rich compounds in the treatment of facial bumps.

Fats and cholesterol are the highest perpetrators in blocking blood vessels. Sulfur can be used in unclogging the blocked vessels to restore normal blood flow.

23. An antidote for some poison infections Not really an antidote, but sulfur is used in the treatment of some isolated cases of poisoning such as ivy and oaky infections.

Some people may experience harsh symptoms while undergoing menopause. Sulfur can be used to mitigate these symptoms.

As a protein component, correct proportions are used for muscle development.

Body tissues die and require replenishment. Since sulfur is a component of proteins and vitamins, it helps in the repair of worn-out tissues and cells in your body.

There are various causes of shortness of breath to human beings. It is a symptom of many infections including insect bites. Sulfur can be used to treat this condition.

Sore throats and sores resulting from a common cold can be treated using German Ipecac and some diluted form of sulfur.

Sodium nasal spray is the common treatment of hayfever. However, research indicates that sulfur compounds can be used as alternative interventions.

30. Eradication of warts and lice

Lice infestation can be a headache. It targets domestic animals such as poultry and pets. This can be eradicated by the use of sulfur.

The bottom lime sulfur is applied widely; from the manufacture of chemicals to drugs, and even as components of living organisms. It is, therefore, safe to say that they are necessary for the survival of not only the living organisms but also the ecosystems.