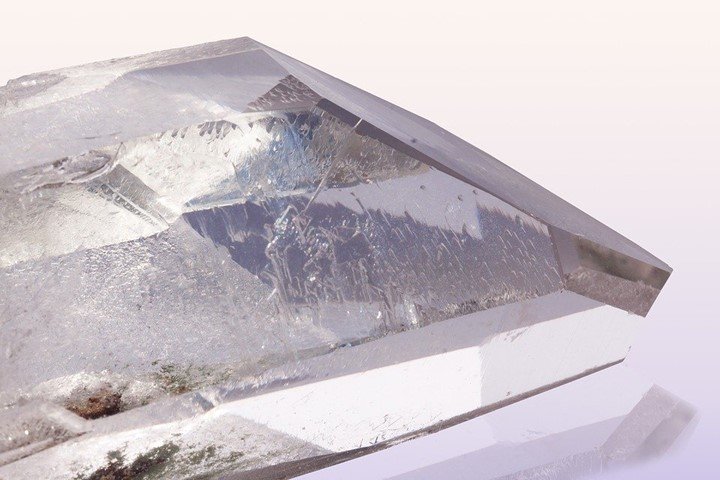 Silicon (Si), with atomic number 14, is a non-metallic chemical element of the Carbon (C) family. It is one of the few elements that can not be found individually in nature. The word “Silicon” is taken from the Latin word ”silex or silicis”, which means “hard stone”.

As the name implies, Silicon is hard and appears like a shiny blue-grey metallic crystal after contamination. Pure Silicon is in the hard form as a dark grey solid. It looks like shiny metal and is soluble in hydrofluoric acid and alkalis.

As a compound, Silicon can combine very well with other elements in a very reactive manner. As a compound or as a singular element, Silicon is used in the manufacturing industries in making several semiconductor items. The largest producers of silicon minerals are China, Brazil, Norway, and Russia.

A large percentage of the Earth’s crust is made up of silicon as sand and clay. It combines very well with oxygen. Artificially, silicon can be produced by the combination of neon, oxygen, hydrogen, nitrogen, and helium.

Where can Silicon be found?

The silicates or the oxidized form of Silicon dioxide is commonly available on the Earth’s crust and the mantle as sand, soil, or clay. It is also available in natural waters, and in the atmosphere in the form of dust. More so, it is found in many skeletons, tissues and body fluids of animals.

What are the Properties of Silicon Element?

Being a semiconductor, Silicon’s electrical conductivity is intermediate between the conductivity of a pure conductor and an insulator. It can be converted into a pure conductor via a process known as ”doping”. Silicon exists in two allotropic forms, as a brown amorphous and as a dark crystalline.

As regards the chemical properties, Silicon combines very effectively with metals; hence, the reason why it can be doped. It combines with other elements, and non-metals to form compounds. It can also combine with oxygen to form Silicon dioxide or silicate minerals. The oxide form of the element is highly stable especially when the temperatures are high. If you ignite dark-brown crystals then, it can burn in air. It looks transparent in long-wavelength infrared radiation, and it reacts with acids like nitric and hydrofluoric acids.

What are the Uses of Silicon?

Being one of the most commonly found elements within the Earth, Silicon is used in the manufacturing of several items such as: The compound of Silicon (Silica) is in the form of sand and clay. It is a vital ingredient that is used in making concrete and bricks. The houses, roads and other vital infrastructure of your city are made up of Silicon.

Small Integrated chips in your computer and other devices like mobiles, tabs, laptops, etc., are made up of Silicon. All memory cards, processors, RAM, ROM, and other minute components in a computer are made with Silicon.

The photovoltaic cells on the solar panel are made up of Silicon, and it is very efficient in converting light energy from the sun to electric energy.

The compound known as Silicon Dioxide is used in making glass and ceramic products. The compound is softened by heating and then, reshaped into glassware.

The less-pure Silicon is used as a reducing agent in metallurgy. It can be used as an alloying element in aluminum, brass, steel, and bronze.

It is chemically a silicon-oxygen polymer attached to methyl groups. The oil of Silicone is used in making cosmetics, shampoos, and hair conditioners. It is also used in creating waterproof sealants in windows and washrooms. As a good insulator, it is used in contact lenses, bandages, implants, and catheters. Silicon is used in the manufacturing of many kinds of electronic components including transistors, semiconductors, integrated circuits, etc. The pure silicon is doped with a small impurity that allows electrons to move around and conduct electricity.

The Silicon-based high-power laser provides a beam of 111°C temperature along with a 200A/cm2 threshold current per unit area and 100mW output power. Silicon photonics can create the process of optical data at high speed.

Silicon is also used in the manufacturing of Silicone rubber. It is a stable product as compared to a regular rubber in terms of elasticity and insulating properties. The quality of the rubber does not degrade at different temperatures. The silicone rubber has further uses in other industrial applications.

The
grease is more like a Silicone oil and other added thickeners. Due to its good lubricating properties, it can be used with rubber in seals. It is highly stable at different temperatures. Grease plays an essential role in the lubrication of the movable parts of machines. It is also essential in the lubrication of medical equipment because it is less toxic for human beings.
The grease also helps in protecting electrical components that are exposed to high voltages.

How Do the Uses of Silicon Affect Health?

Silicon is a non-toxic element that is usually found in connective tissues and skin. When Silicon dust comes in contact with human beings, then it may have adverse effects on the lungs. It does not produce any organic disease or other toxic effects, but it may cause chronic respiratory effects.

Crystalline Silica (Silicon Dioxide) is very dangerous during respiration. It can irritate the skin and eyes if it comes in contact. It can cause redness and watery eyes. Inhaling this compound can irritate the lungs and can cause the production of mucus membranes. Skin inflammation is another side effect that may result in redness, scaling and itching.

If an industrial worker is exposed to quartz and cristobalite, then he may be affected by lung cancer. According to research, workers in industries like granite, pottery, brick-making, mining, etc., suffer from lung diseases like bronchitis, chronic obstructive pulmonary disease (COPD) and emphysema, etc.

Silicon is everywhere around us. The uses of pure Silicon and silicon compounds are enormous. All the electronic devices, solar panels, lasers, construction material, cosmetics, shampoos, conditioners, etc., are made up of Silicon. As a widely used non-metallic element of the carbon family, Silicon is ever-present in the Earth’s Crust.