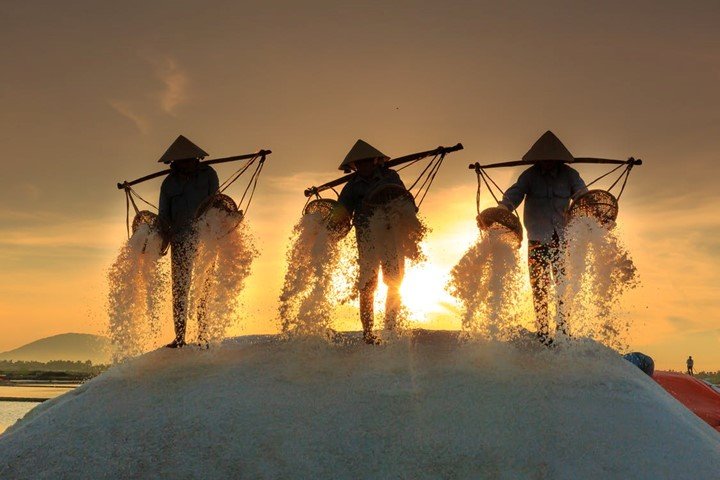 When we hear the word salt, we often think about the substance that we use at home in the kitchen to add flavor to food. However, the word salt generally refers to any substance that is formed when we mix an acid and a base through the process of neutralization. There are several types of salts that are produced when we add different types of acids and bases together. However, the most common salt is sodium chloride which is used to add flavor to food. The following discussion explains the industrial use of various types of salts.

Salt such as sodium chloride is not only used to flavor food at home but is also used by big industries to preserve food. In several industries that produce and process food such as meat companies and some companies that deal with fish, salt is an essential element because it is added to the food to prevent the food from spoiling. When added to meat or fish, salt does not only enhance the flavor of the meat or fish but also prevents the bacteria from invading the food, thus making it possible for the food to last for a very long time without spoiling. This method of preserving food using salt is one that dates to many years ago. However, with the emergence of modern technology, there has been an invention and innovation of modern methods of food preservation such as using refrigerators.

The sodium chloride preserves food in two ways; keeping the food dry and killing micro bacteria. Salt keeps the food such as meat dry by drawing water from the food through a process called dehydration. Once the food is dry, there is a guarantee that living microorganisms will not be present to cause food poisoning. Since all living things need a moist environment to survive, the microorganisms will not be able to survive in the food that has salt. However, the salt also kills the microorganisms in a different way. Due to the difference in concentration of salt between the cells of the microbes and the environment, the osmolality will cause the movement of fluids from the microorganisms until a balance is attained. The movement of fluids will lead to the microbes busting and dying.

Soap is an essential item that is used all over the world for different purposes such as cleaning and sometimes used as perfume. Soap can be in the form of solid which is referred to as bar soap, liquid form or as powder. Despite coming in different forms, soap is used for the same purposes and is manufactured from the same products. In order to make soap, the raw materials needed are fat and an alkali such as sodium hydroxide or potassium hydroxide. Some small scale producers obtain fat directly from the animals such as cows from the slaughterhouses and use it to make soap. However, on large scale production such as industries, soap makers do not use animal fats that straight from the animals. They, however, use the fat that has already been processed into fatty acids, and therefore, the soaps that they produce have a lot of impurities that need to be removed. The impurities are, however, not removed from the soap; instead, other products are added to the soap to neutralize the impurities. The bad smell, for example, is removed from the soap by adding perfume and fragrances. Other additives are also added to make the soap more colorful and attractive to the eyes of the buyer.

The soap is manufactured in different methods depending on the manufacturer’s preference. The first method is called the Kettle Process. When using this process, the alkali and fat are melted together in a tank until they react and produce soap and glycerin. The mixture of glycerin and soap is then treated with salt causing the two to separate completely so that soap rises on top and glycerin settles at the bottom. The remaining fat is then removed by adding a strong caustic solution, and finally, the soap is boiled with water to separate good soap from the impurities. The soap at this level contains seventy percent soap and thirty percent water. The other substance contains impurities.

The artificial textile fiber, which is also referred to as rayon is a fiber that is manufactured from cellulose. There are several ways in which rayon can be produced which will lead to different types of material. However, in order to produce the fiber that suits the desires of the maker or the buyer, the manufacturer can use make some alteration in the raw materials used, the chemicals that are used in the process as well as the ratios of the materials used among other things. Therefore, it is easy to customize the brand of the rayon that is manufactured to suit the tastes and preferences of different persons.

To make the artificial textile fiber, one has to choose the best process of manufacturing that makes them comfortable because there are several methods used. However, the common methods used to make regular rayon are called the Manufacturing Process. In this process, cellulose is dipped in sodium hydroxide, which is also referred to as caustic soda. The sheets of alkali cellulose are produced and kept in a tank for two days. Different chemicals such as liquid carbon disulfide are then added to the cellulose to produce a thick fluid that is stored for the other four days. The liquid is passed through a spinneret to produce fiber that is later on passed through an acid to produce more fine filaments. The fiber is then used to make rayon by using different methods of weaving that suits the maker.

Hard water is water that has passed through different types of rocks or materials and collects some elements such as calcium and magnesium. Hard water comes with a lot of disadvantages when used. Cleaning is one of the problems associated with hard water because is not possible to clean the dirt from the clothes while using hard water. When we use hard water to wash dishes and other kitchen items, the items never become clean because they will show the dirt as soon as they dry up. When used to cook, the calcium and magnesium in the hard water lead to the formation of calcium carbonate and magnesium carbonate respectively, that settles at the bottom of the item used to boil the water. However, there is a solution to this menace of hard water.